The Hadish or "The Palace of Xerxes " 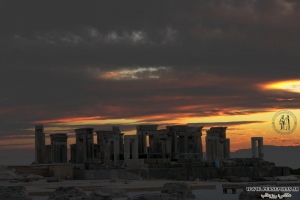 The palace which Xerxes built as his private residence on the terrace is twice the size of the Tachara of Darius, and is usually called the Hadish because it is so called in one of its inscriptions. It stood on a platform hewn from the natural bedrock 18m higher than the level of the plain and was ascended by four staircases: one from the Tachara courtyard, another from the court south of the Tripylon, and the remaining two from the west wing of the Harem.