The «Unfinished Gate» and the «Archive» 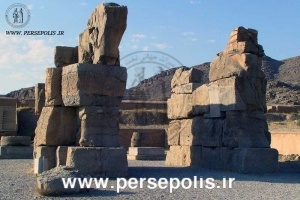 The «Unfinished Gate» and the «Archive» area. The former was intended to be a larger copy of the Gate of All Lands, and was to link the latter structure to the Hundred Column Hall via the «Army Street». Its construction however, was never completed, probably due to the invasion of the Macedonians.

This incomplete building is an antique «workshop» where the techniques and procedures of cutting, polishing, and shaping stone, as well as assembling it, can still be studied. The plan and intended appearance of the building can be reconstructed by comparison with the Gate of All Lands. The pillars of the two doorways were to be supported upon the backs of winged-bulls, and the hall was to have four columns with square double-stepped bases and tall shafts. To the north of the Unfinished Gate and near the northern wall of the Terrace, were structures which, to judge from the objects recovered in them, had been the Royal Archive of Persepolis. In the northeastern corner of the Terrace, some thirty thousand small clay tablets inscribed in the Elamite cuneiform writing and language were discovered. A substantial number of the preserved examples were read by Professor R. T. Hallock, who published their transcriptions and translations in his monumental and indispensable work. These tablets record payment of rations to officials, work groups, messengers, and priests of various faiths. They also reproduce commands and proclamations of high official, etc. They thus include many important documents which allow us a fair insight into the economic, social, and administrative conditions of the Achaemenid period.

To the west of the Archive, traces of several vestibules, chambers, and fortification structures can be seen. In the area north of the Army Street, a pair of capitals shaped like double-headed leonine eagles were found in the years 1952-54. These capitals were finely proportioned and finished and were probably on the way to a building on the Terrace, although we cannot determine which one. In order to avoid obscurity, we raised these capitals and placed them on top of short, plain column shafts. They have gained fame by becoming the symbol of «Homa», the National Airline of Iran.

More in this category: « The Stone Well Other Remains »
back to top