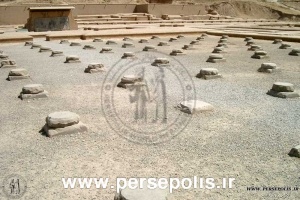 The fabled Treasury of Persepolis stood south of the Hundred Column Hall and east of the main wing of the Harem. It was constructed in several stages. One of the earliest buildings to have been built on the Terrace, the original Treasury measured 120x60m, and its long axis was aligned in a west-east orientation.

A small doorway in the middle of the western wall, not far from the Foundation Inscriptions of Darius on the southern wall of the Terrace, gave access to the complex, which consisted of long narrow guardrooms and many columned halls, including one with thirty-six columns and another with twenty-four columns. As the work progressed on the Terrace, Darius enlarged the Treasury, adding to it on the north a pair of twenty-four columned halls, a spacious hall with ninety-nine columns (11x9 rows), a court and several guardrooms. Still later, Xerxes removed the western part of the enlarged Treasury (in order to erect the main wing of the Harem), but he extended the building northward to include a rectangular hall with one hundred columns (20x5 rows) and several guardrooms.

The whole complex was provided with a small door near the eastern corner of the north wall. Since Xerxes specifies that, «what my father built, that I preserved», the modifications of the Treasury had probably been ordered by Darius himself.

The final Treasury resembled a fortress, with a thick mudbrick wall, the outer face of which was cut at regular intervals with three-stepped niches. The center of each niche was decorated with a lance carved in the mud-brick wall. The guard rooms and hypostyles also had brick walls. The columns had stone bases (square double plinths or discoid slabs resting on square plinths), and wooden shafts. The latter were covered with gypsum plaster, and decorated with colorful designs, as can be seen from the reconstruction (based on Schmidt’s findings) of one of those columns illustrated here. Among important objects

housed in the Treasury were two orthostats, each ornamented with the representation in relief of an «audience scene»; this showed a Great King, probably Xerxes, enthroned his crown prince, Darius, standing behind him, as well as several senior officials of the empire.

These sculptures originally ornamented the central facade of the outer stairways of the Apadana, but were removed to the Treasury after Xerxes; in their places, figures of eight soldiers were carved. In 1936 Schmidt discovered these two reliefs in their secondary positions. One of them, (belonging to the

One of the most outstanding discoveries of E. F. Schmidt in Persepolis was the recovery of 750 small clay tablet (c8x4x2cm) all inscribed with cuneiform characters in the Elamite language. Of these, 656 tablets were found heaped up in a single spot (in a columned hall to the northeast of the ninety-nine columned hall). Together with them were shards, also inscribed, which were probably labels of the objects and documents housed in the Treasury, for they bore the seals of supervisors and senior officials. Everything in the Treasury showed evidence of a devastating fire, particularly in the spot where documents were found. A number of the tablets which were well preserved have been read and published by Professor G. G. Cameron.

The whole complex was provided with an underground drainage system, part of which was exposed by Schmidt’s excavation. The excavators were forced to shorten the walls to a standard height, for they stated that they were unable to preserve such high walls. Unfortunately, this shortening resulted in the disappearance of some important architectural and artistic features of the Treasury.

More in this category: « The «Palace G» The Royal Tombs »
back to top