homeWorld HeritagePersepolisThe «Gate of All Lands»

The «Gate of All Lands» 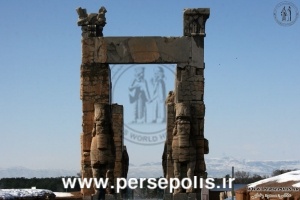 This was a four-pillared hall constructed to the east of the landing place and some 22m away from the edge of the platform. Iranian dignitaries and representatives of other nations passed through this hall in order to be led to the Audience Palaces (the Apadana and the Hundred Column Hall) on the Terrace.

This is clear by the fact that it stands as the «gatehouse» of Persepolis, and was called by its builder Xerxes, «the Gate of All Lands» (Duvarthim visadahyum in his Old Persian language). This descriptive and colorful designation is much better and more appropriate than other names such as «the Gatehouse», or «the Gatehouse of Xerxes», and it nicely demonstrates the nature of the Persian Empire and the purpose of Persepolis. The empire was a federation of many nations each with cultural freedom and national identity; and they met at one center, a sort of «United

Nations», which was Persepolis. It was there that cultures met and people interacted and benefited from each other’s skills and thoughts. One could say that the «Dialogue of Civilizations» which is the hallmark of modern Iran, was already conceived at Persepolis twenty-five century ago.

The Gate of All Lands was basically a four-columned hall. Its thick mud-brick walls were covered with ornamental colored (glazed) tiles. Of its stone columns three are now standing. There were also three stone doorways; one was the entrance, leading into the hall from the west, and the other two served as exits, opening to the court of the Apadana on the south, and to the «Army Street» on the east. Although the foundation of this structure may have been laid down by Darius the Great, its actual construction was the work of his son, Xerxes. The date of construction can be narrowed down to between 490 and 470 B.C.

The hall is square in plan and covers an area of over 612sq meters. Its roof stood 18m above the floor, so that its crenellation would have been 33m higher than the level of the plain. The columns reached a height of over 16.5m and each was composed of five elements. First was the base, which had the form of a bell and was ornamented with vertical fluting. Second was the torus, a discoid piece of stone which rested directly on the base. Third was the shaft of the column which was cylindrical in shape and consisted of several pieces, and bore forty-eight vertical fluting.

One of the reasons why we say that this Gate of All Lands served a sort of waiting room for the royal guests of the Achaemenid period is the presence of a stone bench surfaced with smooth black stone abutting the walls of the hall. It must have been intended to provide a comfortable seat (it is 52cm high and 52cm wide) for the royal guests. In the center of the north bench is a gap, and in the middle of this is a stepped platform rising slightly higher than the level of the bench itself. This platform seems to have served as a seat or stand for a most distinguished member of the court in some ceremonies performed in the hall (no connection between this platform and an ordinary altar can be established). If one ascends on this platform, one can observe the main Apadana hall. So, in antiquity if the south door of the Gate of All Lands were to be left open, a person standing on the platform could easily observe what was going on in the Audience Hall. Therefore, we interpret this platform as the stand of the chief usher or master of ceremony who, observing the king’s throne and audience ceremony in the Apadana, arranged for the royal guests including the representative of various nations to pass in orderly fashion from the waiting room which was the Gate of All Lands to the Apadana courtyard and proceed to the throne of the king giving audience. In its original state, the Gate of All Lands must have been a magnificent building. The inner sides of its walls were faced with glazed bricks of various colors (green, blue, orange, etc.), designed with rosettes and palm tree patterns.

Some bricks recovered from here are now kept in storage at the Persepolis Museum. Despite much weathering, they still retain parts of their original colors.

More in this category: « The Hadish or "The Palace of Xerxes " The Apadana or «The Audience Palace» »
back to top