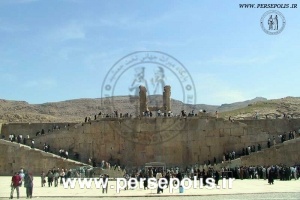 The Terrace of Persepolis is ascended by means of a grand double-flighted staircase situated towards the northwest corner of the platform. Here, just in front of the platform, and adjoining the terrace wall is an area measuring 10.5x7 meters, which is paved with huge well-polished blocks of gray limestone.

This pavement rises slightly above the level of the plain, and is rectangular in shape. Each of its two short sides leads to a flight of steps. These flights ascend for sixty- three steps, reach a landing place, turn 90° into an open space, again turn 90° and ascend for another forty-eight steps until they reach the second landing place in front of a building called the «Gate of All Lands», at a height of 12m above the ground. Thus, each flight contains 111 steps; each step is 6.70m long, 10cm high and 38cm wide. 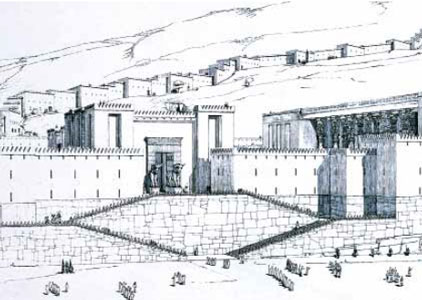 Here and in many other cases, the numbers of Persepolitan elements have had symbolic meaning, and we may take them as witnesses to Persian religion and traditions. Because these steps have unusually short raises, they can be easily ascended by horses, and it is known that during the recent centuries people did in fact mount the steps on horseback.

However, the popular view that they were deliberately designed so shallow in order to accommodate horsemen is entirely groundless. Firstly, there is no trace of the wear which such action would have necessarily caused on the surface of the stone. Secondly, according to Iranian tradition, it would have been a grave insult to enter the palace of a ruler on horseback. In fact, Persepolis itself tells us why there were made in that way. The sculptured representation on the Tripylon staircase which depicts the dignitaries of the Persian Empire mounting shallow steps (see pp. 173- 74) clearly shows that this shallowness was intended to provide sufficient space for large groups of royal guests to climb the steps with ease while conversing with each other and often holding hands. We must also bear in mind the fact that many of the dignitaries invited to Persepolis must have been advanced in age and not physically strong. As one of the reasons for providing two identical flights of steps, it has been suggested that during the celebration, Iranian noblemen mounted the stairway on the right while nobles of the subject nations took the stairway on the left, all joining in the «Gate of All Lands».

More in this category: The Hadish or "The Palace of Xerxes " »
back to top