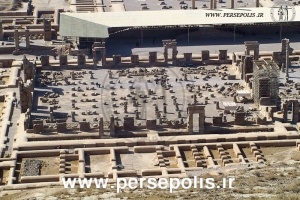 with one hundred columns east by a series of guardrooms and storage chambers, on the south and west by long narrow vestibules, and on the north by a sixteen-columned and eight monumental doorways. The hall was surrounded on the portico. A foundation inscription in the Babylonian language, recovered by Herzfeld in the southeastern corner of the hall, tells of its origin:

Hence, the date of its construction falls between 470 and 450 B.C. The walls of the hall were faced on the inside with a course of polished black stone, 40cm high. The northern wall waspierced by two doorways, five windows and two niches, while the other three walls each had two doorways, two windows, and nine niches. All eight doorways were sculptured. On the jambs of the northern doorways the king was shown with his soldiers, and on the southern doorways he was shown with his thronebearers.

The smaller doorways on the west and east each bore representations of a royal hero in combat against wild creatures.

The roof of the hall was supported by one hundred columns, (l0x10 rows), each of which had a bell-shaped base, a discoid torus, a fluted cylindrical shaft, elaborate floral elements, and a double-headed bull. Of the capitals, two had survived, and these were removed and taken to Chicago in the 1930’s. Another one is in the Iran National Museum. Thanks to G. Tilia, we now know that each column had a height of approximately 14 meters.

The sculptures of the southern doorways depict Artaxerxes I enthroned and being borne into the hall. On each of the four jambs is carved a scene divided into four horizontal panels, above which hovers the Royal Glory (winged circle with human bust). These figures were mutilated by Herzfeld, who broke the upper part of the panel and took the main portions, decorated with the winged-man, to American museums. Only one of these has been restored, and our investigations revealed the original colors which once covered these figures.

Behind the throne stands only one official: an eunuch who holds a neatly folded towel in one hand, and extends a flywhisk above the head of the king with the other hand. The entire representation, particularly the figures of the Iranian glory and the Royal Glory, glowed with various colors. Herzfeld saw (1941, p. 255) «on a deep block background» the colors «luminous and transparent». They were «turquoise blue [which] changes with a light scarlet red, the yellow [which] has an orange or gold shade; deep purple and lapis blue, and… an emerald green». Later Dr. A. B. Tilia and G. Tilia thoroughly analyzed traces of paint on these reliefs and restored their original forms. 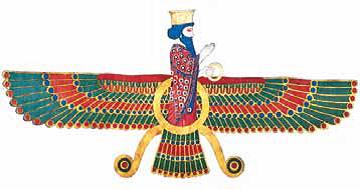 More in this category: « The Apadana or «The Audience Palace» The "Palace H " »
back to top