The Audience Palace of Darius is known as the Apadana. The term Apadana means a palatial building and has survived in Arabic afdan and Persian ayvan/ivan, but the modern ivan has a different shape, resembling a portico or a hall opened in one side and closed on three other sides. The Apadana of Persepolis covers an extensive area in the northwest of the Terrace.

A large open court, formed like the letter L, surrounds its northern and eastern sides; the longer, eastern leg measures 167x34m, while the shorter, northern leg measures 152x50 meters. The northern courtyard is bounded on the north by the Gate of All Lands and two long and narrow guard rooms. These guard rooms were constructed of mud brick and were built behind the southern wall of the «Army Street»; they were entered by doors opening into the Apadana courtyard.

The longer (eastern) section of the Apadana courtyard was bounded on the south by the Tripylon (Central Palace) and on the east by the following structures starting from the north to the south:

a) a long and narrow room with thick mud-brick walls, the door of which was opened into a corridor linking the Apadana courtyard to the east court of the «Unfinished Gatehouse»; due to its strong position, this room has been identified as the Royal Armory;

b) a long and narrow guard room with three doors: one opening into the corridor just referred to, one leading to the north court of the Hundred Column Hall, and the third opening into the Apadana courtyard;

c) a long room with a wide gate leading into the court of the Hundred Column Hall; this is presumed to have been the chariot stable of the King;

d) another guard room with a door opening into the northern courtyard of the Hundred Column Hall;

e) a double-storied tower northwest of the Hundred Column Hall; 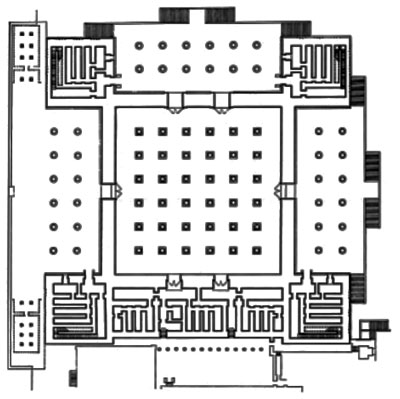 It is difficult to decide whether the floor of the Apadana courtyard was paved with stone or brick, or simply covered with grass and flowers, or even sand and pebbles. The modern visitor is immediately fascinated by two features. The first is the so-called water tank described earlier, and the second is a series of underground water channels. These are plainly visible in the north and northwestern areas but are covered by the floor in the eastern area. As a large portion of the Apadana foundation rests on natural bedrock, the channels are dug into the rock, and it is plainly seen that the foundation of the Apadana courtyard was also constructed on the rock of Mount Mithra.

Until recently a third interesting detail was a stone capital in the form of a double-headed lion-griffin, which lay on a short base in an enclosed pit northeast of the Apadana courtyard. It measured 3.70m in length, 1m in width, and 2.30m in height.

More in this category: « The Service Entrance The Tachara or «The Palace of Darius» »
back to top