The Tachara or «The Palace of Darius» 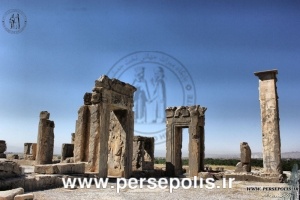 One of the oldest and most interesting palaces of Persepolis is the charming structure built south of the Apadana and on a platform 2.20-3m higher than the level of the latter and the adjacent courtyard. In the inscriptions carved on its pillars, this palace is once called Tachara and another time Hadish.

The former name has gained wide acceptance, and will be used here as well. Because of the glossy surface of its polished black stone, the palace was formerly called the Hall of Mirrors.

The Tachara was built on a rectangular plan, measuring 40m by 30m, and a north-south axis. It consists of a main hall with twelve columns, two smaller columned halls on the north, a columned portico on the south, and several guard rooms or storage chambers on either side. A stairway with two reversed flights leads to the portico from a courtyard on the south. The inner walls of these flights are sculptured with representations of servants and attendants, dressed alternately in the «Median» and «Persian» costumes, carrying food and utensils.

A frieze consisting of several scenes is sculptured on the center of the facade of the staircase. In the upper part of the middle section is the winged-circle (the Iranian Glory), flanked by two antithetic seated sphinxes who each raise a hand towards it in a gesture of veneration. Behind each sphinx is a terrace of palm trees. Below this scene are two antithetic rows of nine soldiers in the «Persian» costume (fluted cylindrical tiaras, flowing skirts, and three-strapped shoes). They are facing a cuneiform inscription in Old Persian carved by Xerxes in a rectangular area framed by bands of rosettes.

The main hall and other rooms are provided with rectangular niches, each of which is hewn from a single block of stone and is crowned with a vertically fluted architrave element known as the Egyptian covetto cornice. Originally, five doors pierced the walls of the main hall: two opening into the pair of four-columned northern rooms, one giving access to the southern portico, and two leading into the adjacent western and eastern chambers.

More in this category: « The Apadana Courtyard
back to top