homeWorld HeritagePasargadaeTomb of Cyrus the great

Tomb of Cyrus the great 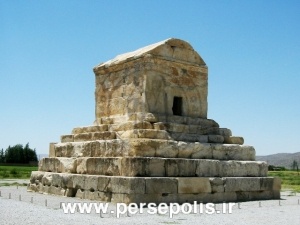 The most glorious and beautiful masterpiece in Pasargadae complex ,is the tomb of Cyrus the great which is stands still firm and stable during 25 centuries. The first European tourist who studied about pasargadae was Juzpe Barbaro from veniz who visited this place in 1474 A.D and his book proves that the tomb of Cyrus from that time was called Solomon Mother’s Grave .

The structure itself is made up of two distinct parts: a seven-stepped rectangular platform covering an area of 156m, and a small 7.5m chamber with slanted roofs and walls of 1.5m in thickness.and it has 11m height The entrance door of the grave is situated to the northwest of the construction and is 75cm wide.

This small portal had also two stone doors , which are Now destroyed. After Cyrus was slain in battle (530B.C), his body was mummified and placed in a golden bed among precious royal objects and his weapons. People also thought that no human being could erect such a monument from large boulders(rocks), but was the work of giants at the service of solomon. It was for this reason that this building was also attributed to this prophet and was considered as the final place for his mother.

More in this category: Audience Palace »
back to top