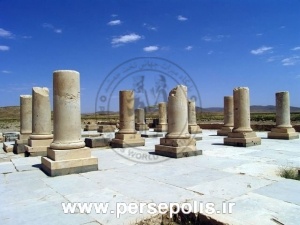 This Palace is situated at a distance of 1350 meters northwest of tomb of Cyrus and covered an area of 3192 meters . Its design and architectural details point to a private dwelling. It includes a central hall, two terraces to the east and west and two open spaces in the north and south.

The central hall had thirty columns with cubic bases in two steps made from black and White stones. Each was on a circular and ridged annulet under a cylindrical shaft of smooth marble on the southwestern end of this terrace, there is only a stone frame on which is written in three languages of Ancient persian, Elamid and Babylonian the following phrase:

"I am cyrus ,The Achamenian king".

More in this category: « The Gate Palace (Winged Human) Tal-e Thakht »
back to top