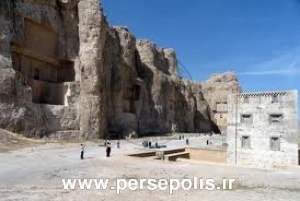 It also referred to as Necropolis is an archaeological site located about 12 km northwest of Persepolis, in Fars province, Iran. Naqsh-e Rustam lies a few hundred meters from Naqsh-e Rajab.

The oldest relief at Naqsh-i Rustam is severely damaged and dates to  1000 BC. It depicts a faint image of a man with unusual head-gear and is thought to be Elamite in origin. The depiction is part of a larger mural, most of which was removed at the command of Bahram II. The man with the unusual cap gives the site its name, Naqsh-e Rostam, "Picture of Rostam", because the relief was locally believed to be a depiction of the mythical hero Rostam.

In 1923, the German archaeologist Ernst Herzfeld made casts of the inscriptions on the tomb of Darius I. Since 1946, these casts are held in the archives of the Freer Gallery of Art and the Arthur M. Sackler Gallery, Smithsonian Institution, in Washington, DC.

Naqsh-e Rustam was excavated for several seasons between 1936 and 1939 by a team from the Oriental Institute of the University of Chicago, led by Erich Schmidt.