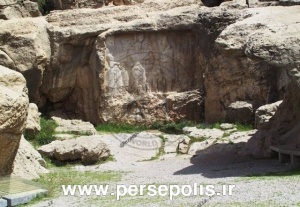 There are three large carving which are date back to sassanid era. As you enter the site, on the right an equestrian investiture scene, and on the left a relief of Shapur  surrounded by his generals. 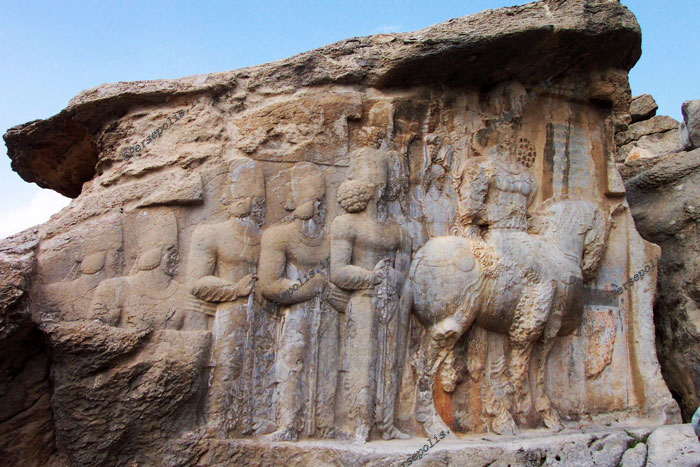 On the latter relief notice the different insignia on the hats of the generals, (the clearest, a trefoil sworl in a circle, resembles a common Chinese symbol)as well as the variety of cloth and chest buckles. They are arranged in similar fashion as regimental numbers and rank of military detachments.

On the chest of Shapur’s horse is a clearly legible inscription relating his ancestry and hailing him as emperor of the Aryans.

The most important document on this site, however, is the carving of the high priest Karter, the Mobad-e-mobadan (priest of priests) under  three  Sassanian emperors: Shapur, Bahram I and II. His head can be seen just behind and above the pedestrian investiture scene, partially covered by branches of a green bush. He has necklace and his crooked finger is covered by a inscription of greatest importance. Here it is related how he as high priest has purified religion and cleansed the land of heresy(probably the Manichaeans) with fire and sword. He is the only non-royal person appearing on a carving.

The central relief shows a procession moving in the direction of a previous water source, which is now dried-up. The center is occupied by the usual investiture scene, showing Ardeshir I receiving the wreath of power  from the god. The crown prince stands beneath the wreath, a symbolism used with each new line of succession.

There is also a pedestrian investiture scene of Shapur  with an angel facing the ravine, possible the source of water.