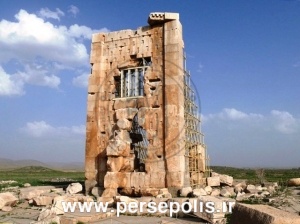 One of the most magnificent monuments of the early Achamenian era is a square tower like structure, referred to as solomon’s prison by the Muslims. Today the single standing wall is the sole proof of its existence. some believe that it was the grave of cambyses the son and heir to Cyrus,

others thought of it as a fire temple and yet there are those who claim that it Was Cyrus’ treasury.(it has  been under investigation).

Among these , the proofs provided to support the first theory seems to be more convincing . The tower resembles a monument in Necropolis called the zoroaster kaaba. 14m in height and measuring 7.27*7.23 the tower stands on a three –stepped platform.